Helping Ourselves, Helping Others

A few months after my miscarriage my ex and I moved from the city to a suburb of Boston. We wanted more space and we planned to start a family.

A month or two after we had moved in, a nice young couple moved next door. She was pregnant. Her due date was on the same month mine would have been. She was expecting a boy.

We were friendly, but not really friends. When they found out I was diagnosed with breast cancer, they baked a cake and left it at our door.  I thought this was a really sweet gesture.

Bear was born a month after my surgery.

I held Bear for the first time right after my first chemo treatment. Back then I still had my hair. He was so tiny and cute.

The winter was long and my treatments were intense so I barely saw the neighbors. I spent my days normally at home and my outings were mostly going to the hospital to get treated.

It was just a little after Bear turned one that we became friends. He used to shout out, “Ivaaaaa!” And I would answer through my window. We would have this long exchange.

I was spending a lot of time with Bear – we played games, read books, baked cookies, have dinner together… I would even help with bath time. I wanted to keep my distance at times. I did not want Bear’s parents to think that I was overstaying my welcome. 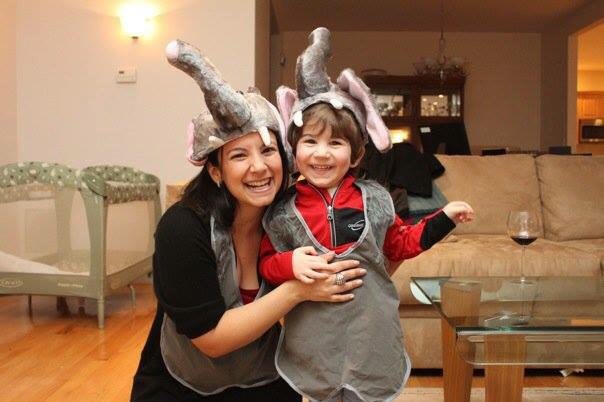 It was Bear who insisted on me staying and I felt that his parents enjoyed the help – we actually became good friends – and knew that their son was happy. So was I.

Bear was the light of my life and the medicine I needed – especially after going through breast cancer treatment. I had so much love to give and the type only a 2-year-old could understand its purity.

The feelings I had for Bear made me realize that the biological bond is overrated. Bear was not part of my family, but yet I loved him as if he was.

Now that I have my son I see a lot of Bear’s traits in him. He has the same intense gaze, especially around new people. He is very verbal and loves books. I love reading to him just as I loved reading to Bear.

Would it be crazy to think that all those things I loved about Bear made me have a son with a lot of his qualities? I don’t know. All I know is that I become the same person around my son that I was once with Bear – a clown, a friend, a dancer…

Bear (and his sister) are now much older and I don’t see them as much – maybe once or twice a year for birthdays.

Even though Bear and his family have met my son once, I would have wanted them to come over to visit after I came back from the hospital, especially after all we had shared. This hurt my feelings, but such is life.

Bear’s mom and I keep in touch but we rarely get together. Our lives are hectic and it is more difficult now that we are not neighbors.